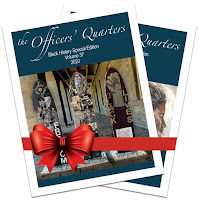 Guest editor: Cynthia Wallace-Casey, PhD
University of Ottawa
It’s been an honour to participate in the development of this two-volume series of The Officers’ Quarters, devoted to Black history in New Brunswick. When I was first invited to embark on this journey in 2019, those of us at the Fredericton Region Museum were amazed at what little representation of Black history existed within the museum’s walls. Certainly, significant groundwork had already commenced in 2017, however, with the publication of a special Black History edition of The Officers’ Quarters. Thanks to guest editor Mary Louise McCarthy-Brandt, and the York-Sunbury Historical Society publication team, the stage was set to explore lesser-known aspects of Fredericton’s past. In that issue, readers were introduced to the historic slavery trial of Nancy; as well as descendants of Black Loyalist Solomon Kendall who lived on “The Hill” in Lower Queensbury. Readers were also reminded of the extraordinary significance of St Peter’s Church in Springhill, where there existed an “equality in Christ” rarely witnessed in Canadian history. This landmark publication left many of us wanting to learn more.
Read more »
Posted by Cynthia Wallace-Casey at 6:21 PM 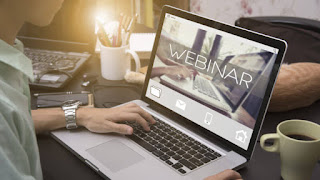 Posted by Cynthia Wallace-Casey at 5:45 PM

Association Heritage New Brunswick WebinarJanuary 20, 2021 Facilitator:  Dr. Cynthia Wallace-Casey, University of Ottawa
In this webinar I demonstrate ways to bridge the gap between educators and museums  - to benefit young people. Museum experts will learn to work with educators (based on the current curricula) to develop programs that excite youth about NB History, as well as connect to classroom needs.  Access the webinar here
Posted by Cynthia Wallace-Casey at 5:10 PM

RAN AWAY: The Slavery Trial of Nancy

By Cynthia Wallace-Casey, PhD
Honorary Research Associate
Fredericton Region Museum
It wasn’t until 1834 that slavery became illegal in New Brunswick. Up until that year, people could be bought or sold as property, with they and their children receiving no hope of freedom for as long as they lived. A typical bill of sale would be worded as such:

This Indenture witnesses that for and in the consideration of the sum of fifteen pounds New Brunswick currency paid me, I do hereby bargain, sell and deliver unto my son John, a negro boy named Sippeo to be his property and his heirs and successors during the life of the said negro, the receipt of which money from the said John HARDING I do hereby acknowledge; and I, the said George HARDING, do also warrant the said property against all claimants whatsoever. In witness whereof I do hereby set my hand and seal at Maugerville, this eighth day of July in the year of our Lord 1797. – Be It remembered that on the tenth day of February 1802, personally appeared before me the above named George Harding and acknowledged the above signature to be his hand and seal and that he delivered the above instrument for the above mentioned purposes. Elijah MILES, J.P. [1]

Many prominent Loyalists were slave-owners—including the first Mayor of Saint John Col. Gabriel G. Ludlow, as well as Col. Edward Winslow, Major John Coffin, Rev. Jonathan Odell, Cpt. William Bailey, and Cpt. Stair Agnew. Historian Watson Smith has estimated that more than 400 “servant” slaves were brought to the region between 1783 and 1784.
By the turn of the century, however, the anti-slavery movement had become very active in this province. Two of the leaders in this initiative were Saint John lawyers Samuel Denny Street and Ward Chipman. In 1800 they challenged the legality of slavery in New Brunswick by bringing to trial the case of Nancy, an individual who had been enslaved for more than fourteen years.
Read more »
Posted by Cynthia Wallace-Casey at 2:31 PM

'I want to remember': Student narratives and Canada's History Hall

My recent publication in the Yearbook of the International Society for History Didactics, Volume 40, 2019, pp. 131-199:

In this journal article I explore student-constructed narrative interpretations of Canada’s History Hall. Drawing from an empirical investigation that included student visitors, as well as adult facilitators at the Canadian Museum of History, I reveal the “big ideas” that students (n=26) constructed about Canada’s past, and how these related to their museum experience.

This inquiry is part of a larger investigation (supported by the Social Sciences and Humanities Research Council) that explores: 1) how the Canadian History Hall represents such difficult topics in history as First Nation settler colonial experiences and Residential Schools; 2) the national narratives that students construct from such a learning experience; and 3) the potential role for museum spaces in enabling Historical Thinking. Read more...

Posted by Cynthia Wallace-Casey at 11:49 AM No comments:

Museums, Heritage, and Reconciliation in New Brunswick – This webinar will define reconciliation while also demonstrating how museums can develop a Reconciliation Action Plan. The instructor will discuss repatriation of collections, noting examples from the Canadian Museum of History and other sites in this country. Access the webinar here…

Posted by Cynthia Wallace-Casey at 3:40 PM No comments:

Constructing patriotism: How Canada's History Hall has evolved over 50 years

In this article, I illustrate how the national narrative in Canada's Museum of History has evolved over 50 years. Located in the national capital of Ottawa, the new Canada's History Hall presents a concise overview of a nation, stretching from time immemorial to the present. It was opened on 1 July 2017 as a signature exhibition in celebration of Canada's sesquicentennial. It also represents a fourth manifestation of a national museum narrative for Canada. From humble beginnings in 1967 (when Canada celebrated its centennial), the narrative has changed substantially in response to national policies and societal values. Adopting a critical discourse analysis methodology, and drawing from archival evidence, I analyse how this national narrative has evolved. Canada's History Hall presents Canadian students with a concise national template for remembering Canada's past. Over the past 50 years, this narrative has changed, as curators have employed artefacts and museum environments to construct patriotic pride in their nation. Until 2017, this narrative was blatantly exclusionary of Indigenous voices. More recently, the Truth and Reconciliation Commission of Canada has called for reconciliation in education, including public forums for education. The Canadian Museum of History has responded to this call by weaving Indigenous voices into the national narrative of the new Canadian History Hall. In so doing, I argue, the museum has successfully entwined patriotism with reconciliation against past wrongs. Read more...
Posted by Cynthia Wallace-Casey at 12:42 PM No comments: 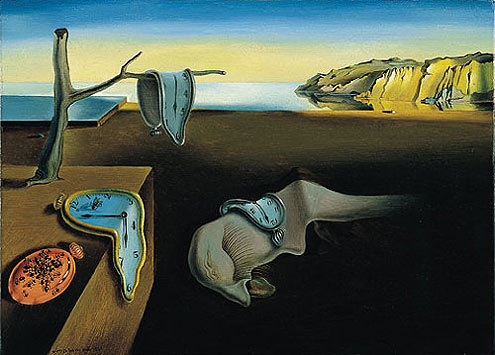 "The Persistence of Memory" by Salvador Dali (1931)